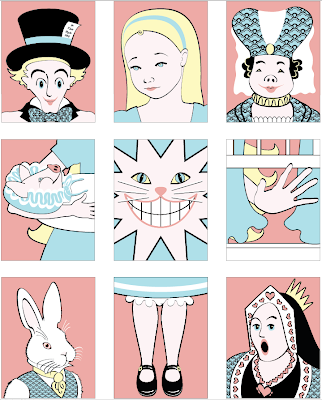 Back in the Fall I drew a series entitled "Props from Alice in Wonderland"; The spotted mushroom, the Mad Hatter's hat, "Eat me" macarons, and tea cups, all in pink and white. That was the first group in my Alice in Wonderland series. This group entitled "Characters" is drawn in two shades of pink, light blue, light yellow, black and white.
"Characters" introduces us to Alice in a big way, also The Mad Hatter, The Duchess, The Cheshire Cat, The White Rabbit, and The Queen of Hearts. The Alice illustrations tell the story of changes she experiences throughout the story. The bewildered look on her face, is directed at the baby she is holding in her arm that just turned into a pig. Her other arm and hand are being thrust through an open window as she once again enormously grows . Her standing legs and feet are symbolic of her height since her height keeps changing. The Cheshire Cat is grinning from inside her because children are so curious as is Alice. So, all five of the center illustrations make up Alice in puzzle like form and then the other characters surround and encircle her, illustrating that the characters bombard and confuse her in the story.
I really wanted to portray the Characters in a non-threatening way. The Props series was suitable to hang in a nursery with its simple shapes and monochromatic pink. It is a calm series. I have the independent toddler in mind for The Character series. When children reach the age of "I'm a big girl. I'm not a baby anymore." The phase when their rooms are transformed from a baby nursery theme to some characters they like. This is also why I portrayed Alice as younger than she is in the book (so that young children could identify with her and also look up to her because she is probably 7 or 8).
As I was saying it was important to me that these characters not be too ominous, not scary in any way. So, The Mad Hatter looks "Mad" in a happy out of his mind kind of way. The Duchess, who is considered by the story and original illustrations to be an ugly woman, I gave pig like features (since she may be the Mother of the child who turns into a pig). Instead of ugly I was going for a sweet pig lady. The Cheshire Cat was particularly important to me to give a happy grin because my daughter finds some characters with big grins to be rather scary. The rabbit I did not draw as irritated which, as he is late, can not find his gloves and fan etc., could be portrayed that way. Instead I tried giving him a handsome portrait. The Queen of Hearts was a challenge. She IS always shouting, "Off with her head!" A rather violent, bossy queen. I played up the bossy side and could not keep her from shouting but tried not to make her look mean.
I hope you like and enjoy this new series. I will be offering them in my shop in the next couple of days. I've been drawing so much for the past week I have gotten behind in everything else and must catch up today, but hope to list these in my shop tomorrow. :)
Posted by Amy Perrotti at 6:42 AM 19 comments:

Email ThisBlogThis!Share to TwitterShare to FacebookShare to Pinterest
Labels: Alice In Wonderland, characters 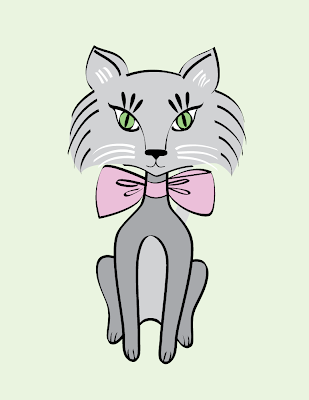 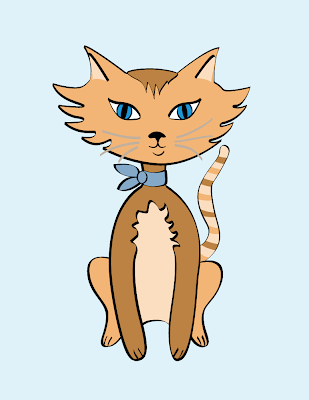 Meet Francesca and Felipe, now available in my shop! They are my latest drawings (I just drew them today) and my first kitty cats. I hope you like them. :)
Posted by Amy Perrotti at 4:14 PM 10 comments:

Email ThisBlogThis!Share to TwitterShare to FacebookShare to Pinterest
Labels: Half the Sky 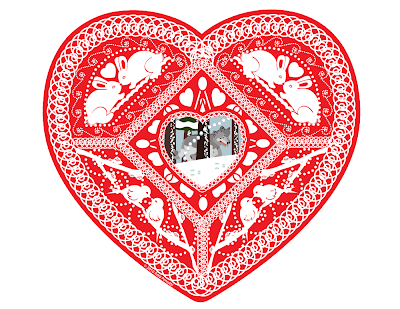 Love is in the air! I am in the process, starting today, of adding Valentine prints to my shop. This one features details from my Little Red Riding Hood Valentine illustration. These prints are on 11"x8.5" (red heart on white rectangular background) paper and can be used as such or can be cut out in a heart shape to give as a card or hang as a decoration. :)
Posted by Amy Perrotti at 11:03 AM 10 comments: 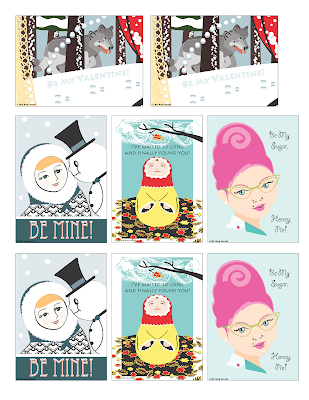 Valentine's Day is coming! Something warm to look forward to in this super cold month. :) New in my shop- this sheet of 8 Valentine cards featuring 4 of my illustrations and sweet Valentine messages!
Posted by Amy Perrotti at 1:09 PM No comments: 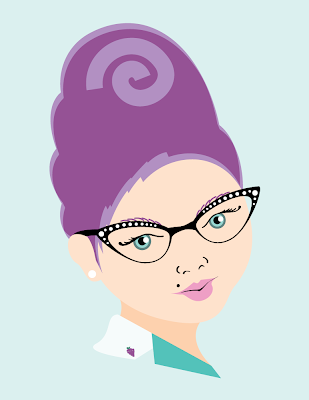 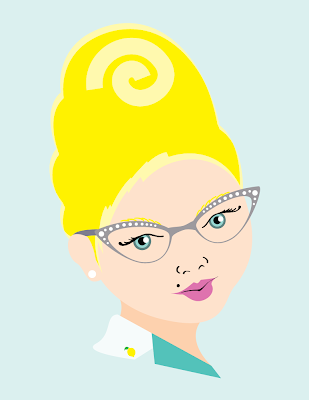 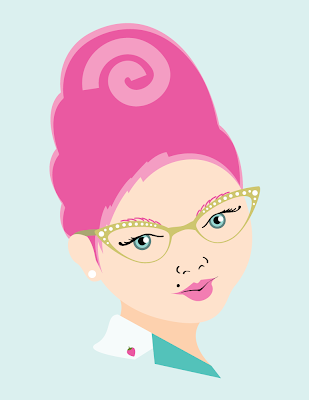 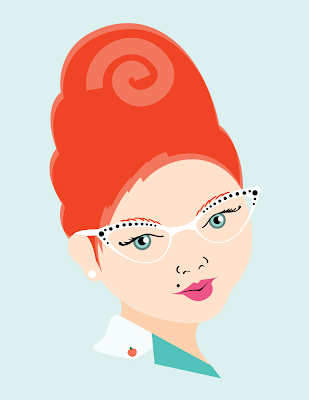 Violet, Chiffon, Sheri, and Peaches make up my Diner Girls series. They are now available in my shop! Alyssa Tasker helped me with writing a story about each of them (read description in shop). Thanks again Al! And come to think of it, it was her suggestion I draw portraits of different hairdos. She is pure genius! I hope you like them. :)
Posted by Amy Perrotti at 1:11 PM 2 comments: 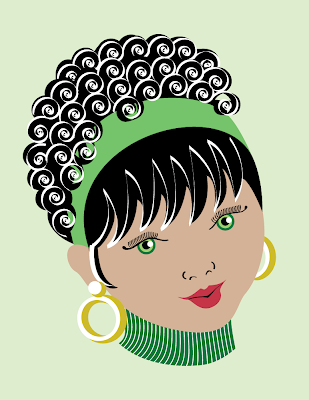 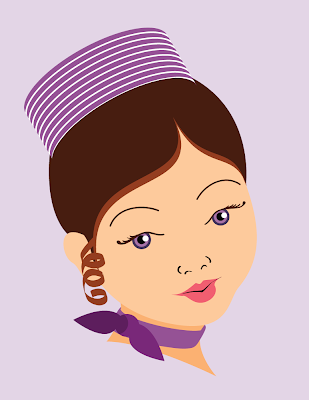 Introducing the first two drawings from my Retro Hairdo Series: Josie and Rita! Alyssa Tasker suggested I do a series of hairdo drawings. Thank you for the suggestion Al! It has been fun, Fun, FUN! :)
They are now available in my shop in 3 sizes: 8.5"x11", 5"x7", and an ACEO 2.5"x3.5".
Posted by Amy Perrotti at 7:37 AM 8 comments: 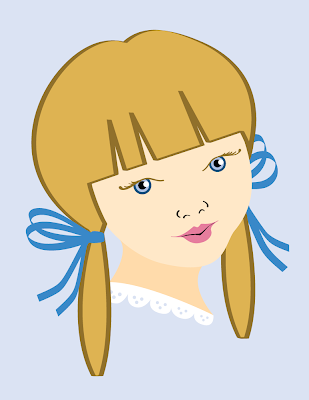 Happy New Year to you all! I've been working on my retro hairdo drawings: beehives, up-dos, even one with a pill box hat! When this sweet creature appeared. I was thinking of a 1970's pigtail hairdo when she transformed into a little girl that reminds me of Amy March from Little Women. It is funny how illustrations evolve and take on a life of their own sometimes. She is now available in my shop in 3 sizes: 8.5"x11", 5"x7", and an ACEO 2.5"x3.5". I am offering all three sizes on all my illustrations whenever possible.
Posted by Amy Perrotti at 7:39 AM 6 comments:

Promote Your Page Too

My work is also available here:

The artist owns all rights to the content and artwork. Please do not reproduce without the artist's written permission. Thank you,
© 2009-2020 Amy Perrotti